What selective forces govern evolution? Why are we constantly adapting? There are many answers to this, and it often boils down to adaptations that confer individuals with reproductive and survival advantages. The Red Queen hypothesis provides an elegant model for how organisms adapt to survive that takes into account coevolution between organisms. It was proposed by Leigh Van Valen in 1973, and is built on the evolutionary arms race between hosts and parasites, where host and parasite constantly try to evolve new strategies to attack and defend against each other.

The name of the hypothesis came from the sequel to Lewis Carroll’s “Alice in Wonderland”, entitled “Through the Looking Glass”, in which there is a scene with Alice and the Red Queen constantly running just to remain in the same spot. How does this apply to biology? Let’s go through a hypothetical example. If a parasite species evolves an adaptation to infect and therefore kill its host, most or all of the host species would be expected to die as the parasite spreads through the population. However, if one or few of the host individuals turn out to be immune to the parasite, those individuals would become common again and would breed rapidly. At this point, the parasite would be under pressure as it would be running out of hosts to infect. If any parasite individual then evolves a new adaptation to infect the now-immune host, it would propagate, and spread through the host population again to restart the cycle. The host and the parasite are constantly co-evolving, or in other words, locked in an arms race. Thus, they remain in the same position relative to each other. This is the reason it was named the Red Queen Hypothesis.

The Red Queen hypothesis has been used to try to answer several important questions in evolution. For instance, it has been used to explain the relatively constant extinction rates (proportion of a large group, such as mammals, that goes extinct over a period of time) of groups of organisms that have existed for variable amounts of time. Constant extinction rates mean that organisms do not keep getting better adapted with time (assuming that adaptedness is inversely proportional to the probability of going extinct). This is consistent with coevolution with parasites in which organisms must keep adapting to stay in the same position (of adaptedness). The Red Queen also provides an explanation for the evolution of sex.

This is an important question because asexual reproduction ensures passage of more of an organism’s genes (100%!) compared to just half by sexual reproduction. The reproductive instinct is largely a product of our innate drive to pass on our genes. So why have sex and pass on just half? Well it turns out that sexual species have much better chances of survival than asexual species under stressful conditions as there is greater diversity in the population as a result of recombination of genes and traits. The advantage of sexual reproduction has been observed in various controlled studies. One study compared sexual and asexual snail lineages (in a species that was capable of both) in an environment that contained natural parasites. It was soon observed that snails which reproduced asexually were outcompeted due to increasing susceptibility to infection, while snails which reproduced sexually persisted throughout the study. This supported the hypothesis that sexual reproduction gives any species an advantage in the battle against coevolving parasites. Thus parasites may have been an important selection pressure for the evolution of sex. Not only are parasites present everywhere, they tend to reproduce very quickly and hence can adapt quickly too. 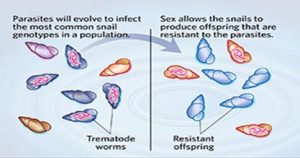 Sexual reproduction thrives in the presence of parasites, as described in the text. Kimberly Battista

Sexual reproduction has another advantage. It ends up benefiting both host and parasite because if a parasite becomes too effective at successfully killing off its host species, then it is also guaranteed to go extinct.

Lastly, the Red Queen hypothesis can also be used to explain the evolution of adaptive immunity, in which the immune system responds anew every time a new parasite or bacteria attacks in our body by learning and remembering how to fight that specific pathogen. Because larger mammals like humans have long generation times, the adaptive immune system provides a means of countering the rapidly evolving pathogens in the environment.

It is important to note that there are probably many other factors that shaped the course of evolution, but the Red Queen hypothesis provides a useful model for addressing several basic questions in evolution and has been supported by numerous evidence-based approaches.