On August 14, 2014, The New England Journal of Medicine (NEJM), the highest impact general medical journal in the world, published two important papers from the Prospective Rural and Urban Epidemiology (PURE) Study group questioning current guidelines based on the perceived benefits of reducing salt intake.  As part of this group and a contributing author in the two articles, Dr. Rita Yusuf, Dean of Independent University, Bangladesh’s (IUB’s) School of Life Sciences, along with hundreds of colleagues from 18 countries, collected and analyzed data from over 100,000 individuals worldwide, who were followed for four years for the largest study of its kind.  Due to the importance of the findings and the fact that they question conventional wisdom, the PURE articles in The New England Journal of Medicine have re-invigorated the debates on dietary salt intake and received wide international press coverage with online articles in The New York Times, Time, The Wall Street Journal, US News and World Report, Forbes, The Huffington Post, Bloomberg, and Harvard Health Publications at Harvard Medical School, among dozens of other news outlets.

The PURE Study is currently comprised of over 20 countries around the world from all socioeconomic stages of development.  The study’s overarching hypothesis is that lifestyle changes acquired as a result of urbanization increase the risk factors for cardiovascular and other chronic diseases.  Dr. Salim Yusuf of McMaster University, Canada is the founder and lead Principal Investigator of the PURE Study.  The PURE Bangladesh component was initiated at Independent University in 2006 by Professor M. Omar Rahman, Vice Chancellor of IUB and Executive Director of the Centre for Health, Population and Development.  The Bangladesh PURE group consists of Professor Rahman as the Principal Investigator, Dr. Rita Yusuf as the Co- Principal Investigator, and numerous faculty and staff members of both The School of Life Sciences and The School of Public Health.  The PURE Baseline Study began at IUB in 2006 with IUB members that included Mr. Kazi Abul K. Azad, Ms. Sadia Deen, Ms. Kalpana Rani Dey, Mr. Ayaz Rabbani, Ms. Haseen Mahbub Cherry, Mr. Imtiaj Hasan, Mr. Adnan Mannan, Mr. Rahat Bari Tooheen, Mr. Moin Uddin Khan, and Mr. Md. Abu Tofiq Talukdar.  Currently, the PURE Follow Up group at IUB consists of Ms. Mariz Sintaha, Ms. Tarzia Choudhury, Dr. S.M. Raysul Haque, Mr. Moin Uddin Khan, and Ms. Shamima Parvin.  PURE in Bangladesh will soon commence its 6 Year Follow Up in Dhaka and rural Manikganj.

For the present study published in the August 14th issue of NEJM (Urinary Sodium and Potassium Excretion, Mortality, and Cardiovascular Events), sodium and potassium intakes were correlated with blood pressure, heart disease, strokes, and death.  Current guidelines in North America and many countries around the world advocate that the entire population reduce sodium intake to below 2.3 grams per day, with a target goal of reaching approximately 1.3 – 1.5 grams per day. The data from PURE, currently the largest international study to look at sodium and potassium intakes and health outcomes, demonstrates, however, that the lowest risk of death and cardiovascular events was found in those who consumed moderate amounts of sodium with an optimal level at 3 – 6 grams per day.  Either lowering sodium intake to below 3 grams per day or increasing it to above 6 grams per day increases the risk of cardiovascular events and death.  In people consuming greater than 6 g of salt a day, the risk of major cardiovascular events or death was closely associated with increased blood pressure.  The increased risk in those consuming less than 3 grams of salt per day did not correlate with blood pressure, but may be associated with the effects of low salt such as modulation of certain hormones.  The second PURE paper published in the August 14th issue of NEJM (Association of Urinary Sodium and Potassium Excretion with Blood Pressure) presents data demonstrating that increased blood pressure is associated with increased sodium levels in urine, with the association being the strongest at higher levels of sodium (greater than 5 grams per day).  The largest effects of sodium on blood pressure were seen in the older population and in people with existing hypertension.  Interestingly, levels of potassium and blood pressure demonstrated an inverse relationship with higher potassium levels being associated with lower blood pressure.

In light of these findings, the PURE group recommends moderation in salt intake for the general population with an increase in potassium-rich fruits and vegetables as a balanced way to reduce the risk of high blood pressure and risk of cardiovascular events.  For distinct populations with specific health concerns, lower salt intakes may be recommended. 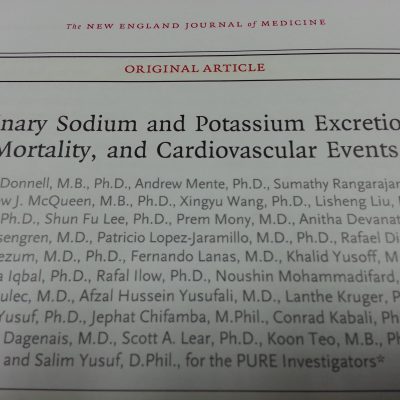 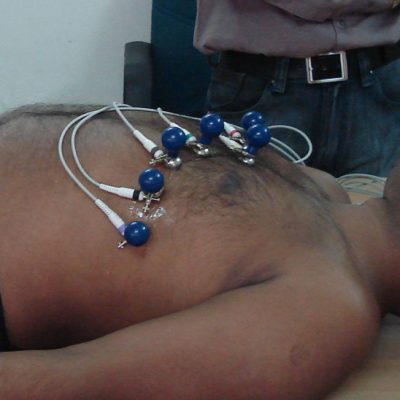 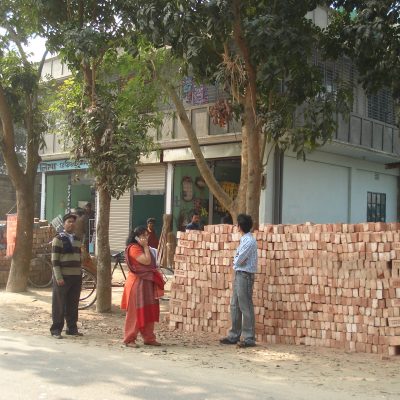 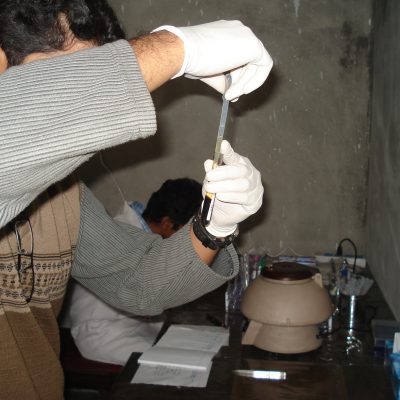 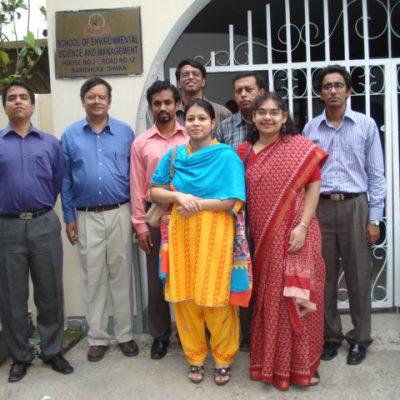 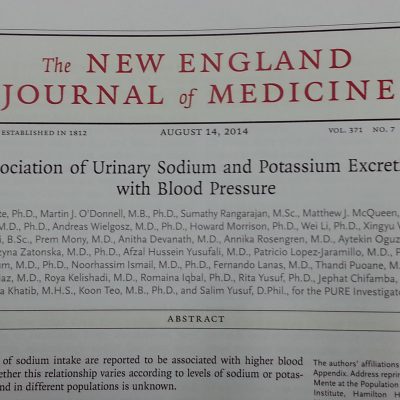