The talk was entitled “Population Genetics and the British Empire”, and the discussion centered around the connections between the science of population genetics and how it affects our understanding of history. Dr Jain has done seminal work on the genetics of Huntington’s disease, a hereditary neurodegenerative disorder, among Indian patients.

Huntington’s disease is much more prevalent in Western Europe than in the rest of the world. Multiple lines of research have shown that causal mutations spread from Europe to other parts of the world as a result of global European migrations during the expansion of colonialism. Dr Jain’s work demonstrated that many Indian families with Huntington’s disease initially acquired the mutation during a period of interbreeding with English soldiers during the Mysore Wars.

The talk touched upon many connections between population genetics and human society, including the implications of genetic science for ideas of biological racism, and the idea that intelligence or violent criminality can be hereditary traits. It was ultimately very well received and sparked interesting questions and discussions among the attendants.

Discussions that explore the interface between science and society are more important than ever. For democracy to function, it is crucial that non-specialists engage critically with cutting-edge science. Events like this offer a way to begin these difficult conversations. 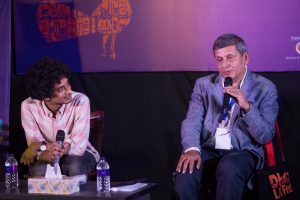